The Influenza virus is an underrated threat, infecting over a billion and killing up to 650,000 people per year worldwide[1].
The Influenza infection begins when the virus Hemagglutinin(HA) binds to the human cell receptor, Sialic acid. After invasion, the virus reproduces itself, and newly born reproductions are spread out. When they leave the host cell surface, an enzyme called Neuraminidase(NA) nicks the bindings between new born virus HA, and host cell sialic acid. New viruses are released, and the process repeats.
‍
‍ 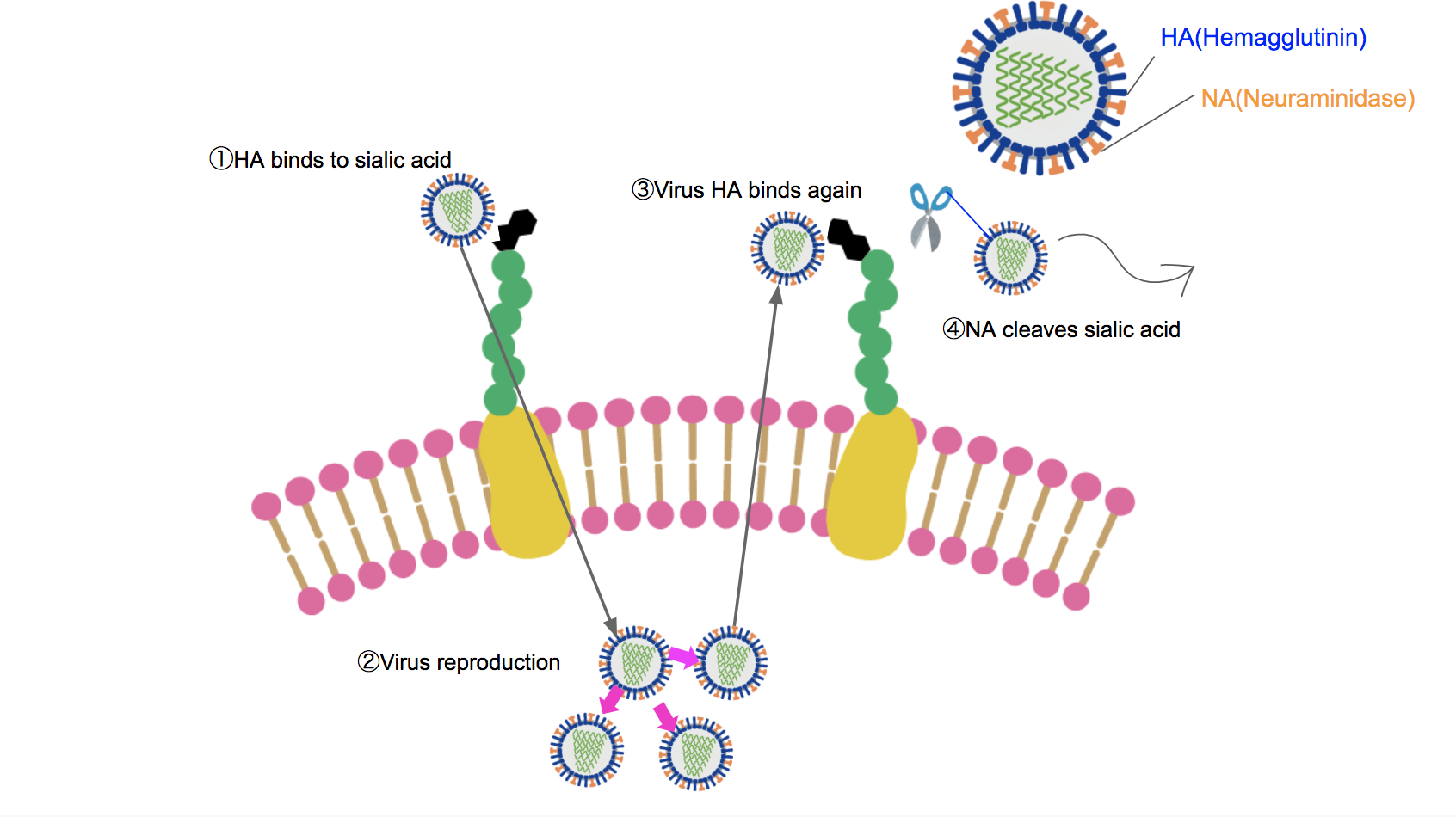 NA inhibitors (Oseltamivir, Zanamivir) are currently one of the most popular influenza treatments together with cap-dependent endonuclease inhibitors(Amantadine). However, the ever-changing feature of the virus often gains anti-viral drug resistance. For example, Amantadine is no longer recommended for treatment use as the currently circulating Type A flu viruses have gained resistance[2]. Likewise, in the near future, Influenza viruses have great potential of giving birth to a new “Reassortant”, with resistance to NA inhibitor drugs.
Although we are almost clueless about the consequences of COVID-19 and influenza coinfection, it goes without saying that if such drug resistant Influenza virus emerges, the medical system will fall into a catastrophe.
Our goal, is to prevent such disasters, by making a new anti-flu-virus drug with mechanisms that focuses on HA, instead of NA.

Our idea is to create a pair of foldable DNA origami membranes which absorbs the Influenza virus, and shields its Hemagglutinin from attaching to human cell receptors. In order to materialize this idea, we decided to use sialic acid, specifically sulfur-linked sialic acid chains which show resistance to Neuraminidase nicking.
These sialic acid chains are placed on the DNA absorption membranes in a manner to form numerous isosceles triangles. The distance between each vertex of the triangle is optimized to increase the Hemagglutinin-sialic acid bond strength, and the triangular arrangement allows highest density on the membrane. The folded pair of membranes are connected with three single stranded DNA hinges, and once it encounters a virus, the structure unfolds and attaches, so as to cover the surface of the targeted virus. The membrane will be secured on virus by multiple sialic acid bonds, and when several of these membranes cover its surface, the virus is incapable of any further interaction with human cells.
The ultimate role of our SLUGGER membrane, is to keep the target safely captured for a few days until the human immune system is activated, and naturally kills the virus.

Our school life this year has been completely ruined by the COVID-19 pandemic, and we are more disgusted with viruses than ever before.
Under stressful and endless quarantine life, we had an idea that if we could think of the absorbent as a SLUGGER which “comBATs (pun intended)” the virus, or in this case the baseball, it could be somewhat refreshing and exciting.
‍